How to summarize television in 2017? While no descriptor captures the year’s diverse offerings, one word crops up more than any other: Netflix. The streaming service’s throw-content-at-the-wall-and-see-what-sticks strategy generated more than 1,000 hours of original TV and movies this year, and though plenty were duds, Netflix also seemed to spawn more critical hits than any other provider.

What this year might have lacked in offbeat ingenuity (Atlanta and Fleabag are scheduled to return next year), it made up for in star power, including an array of heavyweights from the film world. Jean-Marc Vallée. Reese Witherspoon. Nicole Kidman. Spike Lee. Sarah Polley. David Fincher. James Franco. Steven Soderbergh. Justin Simien. With seemingly endless resources on offer alongside almost total artistic freedom, it’s hard not to see still more creative talent being drawn toward TV in 2018 and beyond.

In the interests of discovery (and because so many of the year’s most intriguing shows were debuts), the list below pays most attention to 10 exceptional new shows of 2017, a staggering eight of which premiered in the U.S. on streaming services. It also applauds 10 stellar returning shows. After all, 2018 (and Netflix’s record-breaking $8 billion budget) is just around the corner.

Sarah Polley’s six-part CBC/Netflix adaptation of Margaret Atwood’s 1996 novel came in the midst of a historic reckoning with the abuse and harassment of women. Among the questions this moment provoked: How can stories force people to hear them? The Canadian actress Sarah Gadon gives an incandescent performance as Grace Marks, a convicted 19th-century murderess whose delicate bearing and absorbing narrative convince many of her innocence. More interesting than the reliability of Grace’s stories, though, is the way she transforms them into a kind of agency she otherwise lacks. 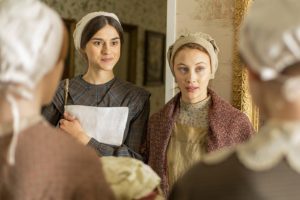