Netflix’s Alias Grace is not your average murder mystery. For starters, it’s based on a Margaret Atwood novel, which in turn is based on the grisly 1843 murder of a wealthy Irish-Canadian landowner, Thomas Kinnear, and his housekeeper, Nancy Montgomery. Kinnear’s servants, James McDermott and Grace Marks, were convicted of the crime, and while the former hanged, the latter received life imprisonment and national status as a “celebrated murderess.” Neither of the convicts’ accounts of what happened to Kinnear and Montgomery ever aligned, and to this day, no one knows exactly how their deaths came to be.

That’s fascinating stuff in its own right, but this is Margaret Atwood’s narrative, and she was never interested in getting to the bottom of a whodunnit. Instead, her gripping 1996 novel imagines visits between Marks and a fictional psychiatrist (one Dr. Simon Jordan, tasked with determining Grace’s innocence or guilt) to explore the perception versus reality of women’s roles within Victorian society and the ways women survive—or perish—within a patriarchy. Those themes drive the Netflix miniseries, one of those rare adaptations that is wholly respectful, almost reverent, of its source material. The show retains much of Atwood’s writing in its dialogue and Grace’s voiceover, exploring the unique horror of life as a young female immigrant in 19th-century North America while recounting the multiple, disparate narratives surrounding the Kinnear and Montgomery murders.

At the series’ center is 30-year-old Canadian actress Sarah Gadon, whom writer Sarah Polley and director Mary Harron tasked with bringing the multifaceted, enigmatic Grace Marks to life. Gadon’s months of preparations—learning to churn butter and sew (Gadon made the quilt you see at the end of the show), obsessively re-reading the source material, drilling with a dialogue coach to perfect an Irish accent—yielded one of the strongest TV performances of the year. Gadon plays 25+ years of Grace’s life with preternatural ease, capturing a terrified preteen burying her dead mother in the middle of the Atlantic as convincingly as a middle-aged housewife. Her story is anchored in the interviews with Dr. Jordan, where Gadon combines remarkable wisdom (you get the sense she is an old woman wearing the face of someone younger) with the fast-talking, almost childlike enthusiasm of a person whose story has lived inside for far too long.

Below, Gadon discusses her journey to finding Grace Marks, grappling with the question of her guilt, and the show’s premiere in the midst of the Weinstein fallout.

Harper’s BAZAAR: What was your relationship to the story before you signed on to the project? Did you know anything about Grace Marks or Alias Grace before?

Sarah Gadon: I didn’t know about Grace Marks, I didn’t know who she was. I picked up the book before meeting with Sarah and Mary because I thought I should read a couple of pages, then ended up reading all of it because it’s a real page turner. I’m so compelled by her. When I started preparing for the part initially, I got so wrapped up in the question of her innocence. I had to untangle myself from that, because Margaret, one of her main pieces of advice before we went to camera was, “It’s so important to maintain the ambiguity. You have to do that in order to honor her memory, and honor this exploration of her.” That was an important piece to the puzzle. It’s not trying to crack her. It wasn’t my job to crack her. It’s kind of your job, as a viewer, but it’s not really up to me, and it’s okay to play different versions of her. There are so many different versions of her story that co-exist in the novel. There’s McDermott’s account, there’s her account, there’s Kinnear’s account, there’s what happened in court. And what Margaret did in writing the novel was use each piece of factual evidence to weave together this story. So, the in between—it’s okay if it’s not clear.

“As women, we’re always in negotiation with how we’re being perceived versus how we feel.”

HB: It’s not your job to find an answer, but you do have to make some sort of convincing argument. How did you get there?

SG: Mary and I decided we were going to do different versions of Grace in the Simon and Grace interviews. We decided there was going to be the guilty Grace, the innocent Grace, and the more kind of neutral, guarded Grace. We did a take of every version, and then it was something she put together in the edit. That was a real exercise of trust, to say, “Okay, I’m going to hand over all these different performances and you’re going to piece them together.” I think that’s also in the writing. There are moments where she’s so clearly guilty, and then moments where she’s so clearly innocent. So, it wasn’t even something that we fabricated. It was more being honest to the writing. Then, in the flashbacks, it’s not about concealing truth. It’s about the experience of the young Irish girl who’s immigrated to Canada, and what is it like to have a best friend? What is it like to be afraid about your future, and your life? What is it to experience an abortion with somebody? All of those things are real, and all of those motivations are clear. So, as much as there’s the ambiguity in terms of her guilt, I feel like in the show, I get to experience a real kind of person, not an idea. 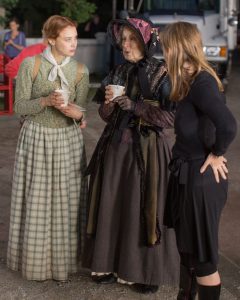