Created by Aaron Martin (Slasher, Saving Hope, DeGrassi: The Next Generation), who also serves as showrunner, Another Life centers on astronaut Niko Breckinridge (Sackhoff) who is focused on searching for alien intelligence. She leads a crew on a mission to explore the genesis of an alien artifact. As Niko and her young crew investigate, they face unimaginable danger on what might very well be a one-way mission.

Hoechlin plays Ian Yerxa, the former commander of The Salvare space explorations ship, who loses the post to Niko (Sackhoff).

Anderson is William, a holographic interface of a sentient A.I. Neither a futuristic Tin Man, nor a robot who pines to be human, William is a new form of life with the knowledge of all humanity at his disposal.

Hoechlin, who starred as Derek Hale on Teen Wolf, plays Superman on the CW’s Supergirl. His feature credits include Bigger and Everybody Wants Some, and he’ll next be seen in Can You Keep A Secret? He’s repped by UTA, Management 360 and Morris Yorn.

Chatwin played Jimmy on seasons 3, 4 and 5 of Showtime’s Shameless. He also recurred as Jason Kellerman on Orphan Black. Chatwin is repped by UTA and Viewpoint.

Anderson’s credits include the role of Leon on Loaded, and key roles on Dr. Who and Trollied.

Ludlow was most recently seen as Arat on The Walking Dead. She appeared on the big screen in Guardians of the Galaxy Vol. 2 and will next be seen in Godzilla: King of the Monsters. She’s repped by Abrams Artists Agency, Mitchell Gossett at Industry and Gail Tassell at Tassell Talent Group.

Madha’s directing credits include series Scorpion, Turn, 24: Live Another Day, Person of Interest, The Blacklist and the pilot of Dick Wolf’s Law & Order: UK. He’s repped by UTA and The Gotham Group. 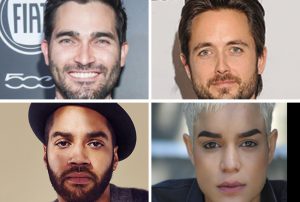